During a media tour in 2007 in which Steve Jobs showed the device to reporters, there was one instance in which a journalist criticized the iPhone’s touch-screen keyboard.

“It doesn’t work,” the reporter said.

Jobs stopped for a moment and tilted his head. The reporter said he or she kept making typos and the keys were too small for his or her thumbs.

Jobs smiled and then replied: “Your thumbs will learn.”

When the iPhone was introduced in 2007, it mystified its competitors, because it wasn’t built for the world as it existed. Wireless networks were too slow. Smartphone users only knew how to use physical keyboards. There were no software developers making apps for touchscreen phones. It frequently dropped phone calls.

But the iPhone was such a remarkable device — fans called it “The Jesus Phone” — that the world adapted to it. Carriers built more wireless capacity. Developers invented new apps and interfaces. Users learned how to rapidly type on touchscreens. Apple kept releasing better versions, fixing problems and adding new capabilities.

Smartphones are a good example of a broader historical pattern: technologies usually arrive in pairs, a strong form and a weak form. Here are some examples:

Strong technologies capture the imaginations of technology enthusiasts. That is why many important technologies start out as weekend hobbies. Enthusiasts vote with their time, and, unlike most of the business world, have long-term horizons. They build from first principles, making full use of the available resources to design technologies as they ought to exist. Sometimes these enthusiasts run large companies, in which case they are often, like Steve Jobs, founders who have the gravitas and vision to make big, long-term bets.

The mainstream technology world notices the excitement and wants to join in, but isn’t willing to go all the way and embrace the strong technology. To them, the strong technology appears to be some combination of strange, toy-like, unserious, expensive, and sometimes even dangerous. So they embrace the weak form, a compromised version that seems more familiar, productive, serious, and safe.

Strong technologies often develop according to the Perez/Gartner hype cycle: 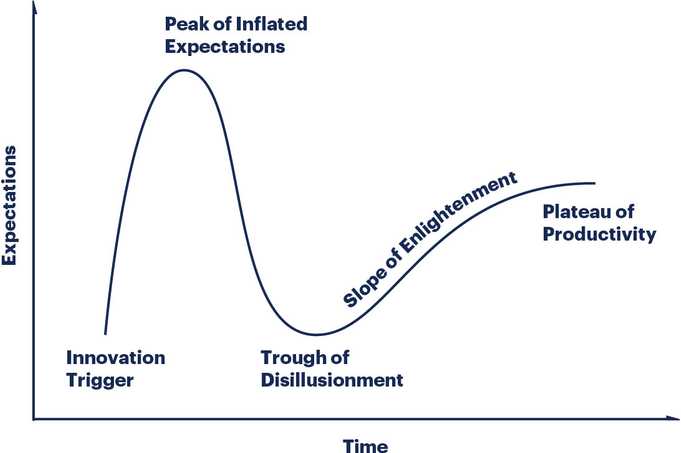 During the trough of disillusionment, entrepreneurs and others who invested in strong technologies sometimes lose faith and switch their focus to weak technologies, because the weak technologies appear nearer to mainstream adoption. This is usually a mistake.

That said, weak forms of technology can be successful. For example, it is very likely that augmented reality will be important, watching traditional sports on the internet will be popular, and so on.

Next post: Inside-out vs. outside-in: the adoption of new technologies
Previous post: Who will control the software that powers the Internet?